WOMEN IN developing countries are the most vulnerable to the effects of climate change, but their plight has been largely overlooked in the debate over how to tackle the issue, according to a United Nations report published yesterday. 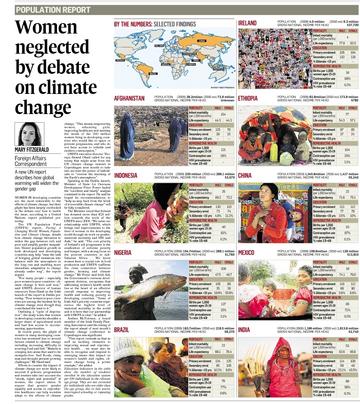 The UN Population Fund (UNFPA) report, Facing a Changing World: Women, Population and Climate Change , details how climate change threatens to widen the gap between rich and poor and amplify gender inequalities. Slower population growth in both developed and developing countries may help “ease the task of bringing global emissions into balance with the atmosphere in the long run and enabling more immediate adaptation to change already under way”, the report argues.

Outlining a “cycle of deprivation”, the study notes that women in developing countries shoulder a larger share of agricultural work and had less access to income-earning opportunities.

In recent years, the plight of women in many developing countries has worsened due to several factors related to climate change including increasing difficulty in sourcing food and fuel. “Malaria is creeping into areas that used to be mosquito-free. And floods, rising seas and drought present growing challenges,” Mr Hand said.

Efforts to counter the impact of climate change are more likely to succeed if policies, programmes and treaties take into account the “needs, rights and potential” of women, the report states. It argues that greater gender equality and access to reproductive healthcare can help societies adapt to the effects of climate change. “This means empowering women, educating girls, improving healthcare and meeting the needs of the 200 million women living in developing countries who would like to space or prevent pregnancies, and who do not have access to reliable and modern contraception.”

UNFPA executive director Thoraya Ahmed Obaid called for any treaty that might arise from the UN climate change summit in Copenhagen next month to take into account the power of individuals to “reverse the warming of the Earth’s atmosphere”.

Speaking at the Dublin launch, Minister of State for Overseas Development Peter Power hailed the “excellent and timely” analysis contained in the report. He said he hoped its recommendations to “help us step back from the brink of irreversible climate change” will be fully considered.

The Minister noted that Ireland has donated more than €23 million towards the work of the UNFPA since 2005. “We value our relationship with UNFPA, which brings real improvements to the lives of women in the developing world through its work on gender, maternal mortality and HIV and Aids,” he said. “The core priority of Ireland’s aid programme is the eradication of extreme poverty and hunger, with a strong focus on the poorest countries in sub-Saharan Africa . . . We know women have a crucial role in food production and UNFPA reaffirms the close connection between gender, farming and climate change.” Mr Power said Irish Aid, the Government’s overseas development division, recognises that addressing women’s health needs lies at the heart of an effective overall response to improving health and reducing poverty in developing countries. “Some of Irish Aid’s priority countries experience the highest level of maternal mortality in the world and it is here that our partnership with UNFPA is vital,” he added.

Anthea McTeirnan, a board member of the Irish Family Planning Association said the timing of the report ahead of next month’s climate change conference in Copenhagen was significant.

“This report reminds us that as well as tackling obstacles to improving sexual and reproductive health . . . we must also be able to recognise and respond to emerging issues that impact on women’s health and rights, climate change being a prime example,” she added.