ANALYSIS: The applicants say Irish law is inadequate but the State argues domestic remedies are untried 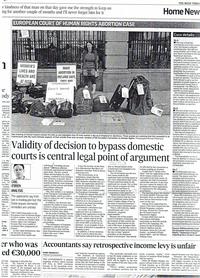 THE CASE being taken to the European Court of Human Rights by three women – known as A, B and C – centres on whether their human rights were infringed because they were unable to terminate their pregnancies in Ireland.

In their legal submissions, they say the ban on abortion jeopardised their health and well-being. Travelling abroad placed “enormous physical, emotional and financial burdens” upon them. The law created delays and hardships for each woman, resulted in each having a later abortion, at greater risk to their health. Abortion restrictions interfered with the most intimate aspects of their private and family lives without adequate justification, they say.

This, they submit, is in violation of the European Convention on Human Rights, which provides a right to respect for one’s “private and family life”.

In addition, the abortion laws impeded the ability of some of the women to obtain necessary follow-up medical care upon their return to Ireland, they claim.

On the point of dealing with the issue through the domestic courts, the applicants say that they had “no chance” in domestic proceedings.

“The inadequacy of domestic remedies to address the Irish abortion laws is clear and has been demonstrated previously before this court,” their submission says.

It says the burden on the State is to demonstrate that there are domestic remedies, both in theory and in practice.

The Government, in its submission, insists that the applicants have failed to exhaust their domestic remedies and, as a result, the application should be declared inadmissible. It also says there has been no breach in human rights, as protected under the European Convention.

“It does not appear that any of the applicants took legal advice from an Irish barrister or solicitors as to the prospect of success in any legal proceedings instituted by them,” the Government’s submission says.

As a result, it says the applicants have no evidence to suggest their application would be futile. It points to the recent “Ms D” case – which centred on the right of a 17-year-old girl in the care of the HSE to travel for an abortion – as an example of how the issue of abortion is arguable in domestic courts.

In addition, it draws attention to the X case in which the then chief justice indicated in his ruling that no interpretation of the Constitution was intended to be final for all time.

“Significant issues of fact are left unascertained and the Court is to a significant extent being asked to make rulings of law on the basis of untested assertion,” the Government submission says.

“This is, self-evidently, highly unsatisfactory and – it is submitted – properly impermissible.”

Because one of the women based in Ireland is Lithuanian, the government of that country has also sent in observations on the case to the court. In papers filed to the court, it invites the court to take the opportunity presented by the case to state “general principles on the minimum degree of protection” that should be afforded by the convention to women seeking an abortion.

It adds that it “seems more likely” that the applications of the three women would not be successful in the Irish courts. In response, the Irish Government rejects this assertion. It also says the court cannot be asked to set guidelines for future application, as requested by the Lithuanian government.

The case has drawn the interest of a large number of groups with divergent views on abortion who have sent in observations to the court on the case.

Among those supporting the stance of the three women are the British Pregnancy Advisory Services, Doctors for Choice and the US-based Center for Repoductive Rights.

Groups which have sent in observations defending restrictions on abortion include the Pro-Life Campaign, the Society for the Protection of Unborn Children and the European Centre for Law and Justice – on behalf of Kathy Sinnott MEP – and the Alliance Defense Fund.

She was unmarried, unemployed and living in poverty when she became pregnant unintentionally. She had four young children, all in foster care as a result of problems she had faced as an alcoholic.

In the year before her fifth pregnancy, she remained sober and was in constant contact with social workers with a view to regaining custody of her children. She felt a further child would jeopardise the successful reunification of her existing family.

She decided to travel to Britain to have an abortion. The British NHS refused to carry out the operation at public expense, so she borrowed money from a moneylender. Her difficulty in raising the money delayed the abortion by three weeks.

She travelled to Britain alone. On her return, she experienced pain, nausea and bleeding for up to nine weeks, but was afraid to seek medical advice because of the prohibition on abortion.

She was single when she became pregnant unintentionally. She had taken the morning-after pill the day after intercourse, but was advised by two different doctors that it had not only failed, but had given rise to a significant risk that it would be an ectopic pregnancy, where the foetus develops outside the uterus.

She was not prepared to become either a single parent or run the risks associated with an ectopic pregnancy. She travelled to Britain for an abortion. On her return, she started passing blood clots and, since she was unsure whether this was normal and could not seek medical advice in Ireland, she returned to the clinic in Britain.

The impossibility for her to have an abortion in Ireland made the procedure unnecessarily expensive, traumatic and complicated.

For three years she was treated with chemotherapy for cancer. The cancer went into remission and she became unintentionally pregnant. She was unable to find a doctor willing to make a determination as to whether her life would be at risk if she continued to term or to give her clear advice as to how the foetus might have been affected.

Given the uncertainty about the risk involved, she decided to have an abortion in Britain. Although her pregnancy was at an early stage, she could not have a medical abortion (where a miscarriage is induced) because she was a non-resident.

Instead, she had to wait eight weeks until a surgical abortion was possible. On returning home, she suffered the complications of an incomplete abortion, including prolonged bleeding and infection.

Source: Edited extracts from the European Court of Human Rights’ “statement of facts” regarding the A, B and C cases.