In a momentous day for women in Ireland, UN member states took a stand for Irish women’s reproductive rights at the United Nations headquarters in Geneva this month during an examination of Ireland’s domestic human rights record. 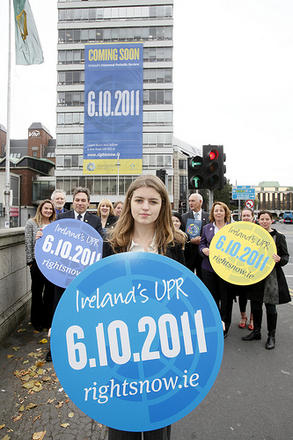 Member states refused to accept vague promises from Minister for Justice Alan Shatter on the abortion issue and demanded concrete legislative action. They also called for firm timelines on the implementation of the A, B & C v Ireland case at the European Court of Human Rights. Other countries made strong recommendations to Ireland to liberalise its restrictive abortion laws. A total of eight countries made strong recommendations or asked tough questions regarding Ireland's restrictive abortion laws.

In response to questions and recommendations at the hearing, the Minister for Justice made a commitment to deal with the abortion issue in an “adequate and comprehensive” way and to “meet our obligations under the convention of human rights”.

Speaking after the hearing, IFPA Chief Executive Niall Behan said: “Today was a momentous day for women in Ireland. It is heartening to see so many of our UN partners taking a stand for women’s reproductive rights at such an important human rights forum.

“The Minister must now not only outline the terms of references and timeline of the proposed expert group which the Government has promised in response to the A, B & C v Ireland judgment, he must also make a firm commitment to provide legislation for adequate abortion services and to give clarity to women and their doctors.”

At the hearing , France and Germany pressed the Government for further information on the implementation of the A, B & C judgment. The UK called on Ireland to legislate for the A, B & C judgment and the Netherlands recommended the introduction of a coherent legal framework and the provision of adequate services.

Five countries (Slovenia, Norway, Denmark, Spain and Germany) called on Ireland to go beyond the A, B & C judgment and either decriminalise abortion or allow for abortion in the case of rape, incest and when a woman’s health and wellbeing are at risk.

In the UPR “Outcome Report” released following the hearing, the Government, failed to support recommendations from Denmark, Netherlands, Norway, Slovenia, Spain and the United Kingdom regarding Ireland’s restrictive abortion laws. It did, however, reaffirms the commitment of the Irish Government to the “expeditious implementation” of the A, B and C v Ireland judgment.