THE GOVERNMENT is to launch a robust defence of the State’s ban on abortion before the European Court of Human Rights in the face of a legal challenge by three women who claim the restrictions violate their human rights. 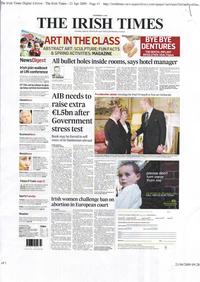 The Strasbourg-based court is considering the admissibility of a legal challenge by the women, who claim their rights were denied by being forced to terminate their pregnancies outside the State.

The women say the restrictive nature of Irish law on abortion jeopardised their health and wellbeing.

The identities of the three – known as A, B and C – will remain confidential as the case proceeds through the court.

While it has been known for some time that the case is pending, papers lodged with the court show in detail for the first time how the Government will contest the case.

The main plank of its defence rests on its contention that domestic legal remedies have not been exhausted by the women.

It also robustly challenges suggestions by the women that there is a lack of post-abortion care or counselling in Ireland.

It also insists the European Convention on Human Rights does not confer even a limited right to abortion and it would be “inconceivable” that member states would have agreed to this.

The women at the centre of the legal challenge include a woman who ran the risk of an ectopic pregnancy, where the foetus develops outside the womb; a woman who received chemotherapy for cancer; and a woman whose children were placed in care as she was unable to cope.

The court, which is separate from the EU, adjudicates on human rights issues among all 47 member states of the Council of Europe.

Any decision of the court is binding on the member states and must be complied with, except if it consists of an advisory opinion.

The women’s complaints centre on four alleged violations of articles in the European Convention on Human Rights, including protection from “inhuman or degrading treatment” and freedom from discrimination.

The women at the centre of the case – who are represented by the Irish Family Planning Association – say the lack of any effective remedy at home means they have satisfied the requirement to exhaust domestic legal remedies.

In addition, they say that taking a case would have been costly, futile and could have forced them to relinquish their anonymity.

While the case has passed the first stage of the hearing process, a formal hearing on the admissibility and merits of the case is expected shortly.

The case will be watched closely by observers given a ruling by the same court in recent years which resulted in Poland being instructed to guarantee access to legal abortions.