IFPA’s dance4life gets the crowd going at Africa Day event 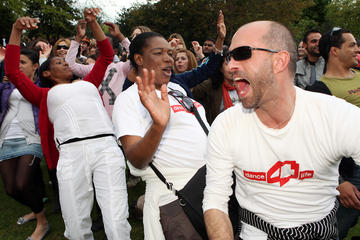 The dance4life team mobilised the audience with its hip hop dance drill and passed on messages about the battle against HIV and AIDS.

Ann Kennedy, coordinator of Irish dance4life programme: "dance4life participated in the Africa Day to showcase the message: Start dancing. Stop AIDS. You can take responsibility and still have fun". The team engaged entire families in dancing home this truth.

See more pictures in our photo gallery or on Facebook.