The Irish Family Planning Association (IFPA) was presented with an award for its cervical cancer awareness work at the European Cervical Cancer Summit last night (26.01.10). 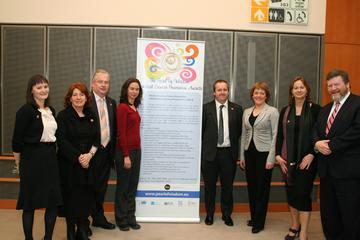 The Pearl of Wisdom Awards are presented by the European Cervical Cancer Association (ECCA) to recognise individuals and organisations across Europe that have made exceptional efforts to prevent cervical cancer in their communities.

Niall Behan, Chief Executive of the IFPA said: “The IFPA is delighted that its work on cervical cancer prevention has been acknowledged by the European Cervical Cancer Association. A national cervical screening service and school-based vaccination programme has been a long-standing policy priority for the IFPA.

“Now that Ireland has a free cervical screening programme in place and plans for a vaccination programme are in the pipeline, we are in a position to almost eliminate cervical cancer in a generation.”

The award ceremony formed part of the 4th Annual Cervical Cancer Summit, which is taking place at the European Parliament in Brussels this week and coincides with European Cervical Cancer Prevention Week (24-30 January).

As the lead ECCA member in Ireland, the Irish Family Planning Association (IFPA) has partnered with CervicalCheck, the National Cervical Screening Programme, to promote the week.

The Pearl of Wisdom is the international emblem of cervical cancer prevention. The IFPA has distributed 20,000 Pearl of Wisdom campaign badges to encourage discussion about cervical cancer and to remind women to make an appointment for a free smear test when they receive their letter of invitation from CervicalCheck. All 330 member salons of the Irish Hairdressers Federation (IHF) are helping the IFPA to distribute the badges this week.

The Irish Family Planning Association (IFPA) has been to the fore in setting the agenda for sexual and reproductive rights in Ireland for the last 40 years. The IFPA offers a comprehensive range of services which promote sexual health and support reproductive choice on a not-for-profit basis, including clinical and counselling services, sexual and reproductive health information, education, training and awareness raising.