Fighting for the rights of women 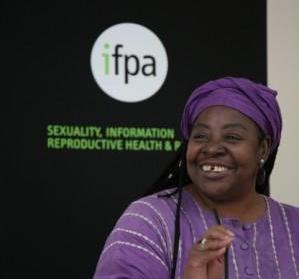 Loretta Ross became pregnant by her 27 year-old cousin when she was 15-years-old.

Forty-five years later, Texas-born Ross tells calmly how her cousin 'decided that it would be a lark to have sex with me' while he was babysitting her one day.

Crucially, the occurrence was pre-Roe v Wade – the 1973 Supreme Court decision that legalised abortion in the United States – meaning Ross had no choice but to have the baby.

Now approaching her 60th year, Ross, who is the national coordinator of Sister Song: Women of Colour Reproductive Health Collective in Atlanta, Georgia, tells how she planned to give the baby up for adoption on birth. 'It was definitely not the way I was planning on becoming a parent. I mean, who wants to become a young teenage mother through incest?" she says.

But the morning after the delivery, the nurses brought all the babies who had been born the night before to their mothers for breastfeeding.

'They brought my baby to me and he had my face," she says. 'I couldn't go through with the adoption."

At the time, Ross was in 11th grade in a Texan school. 'It was the policy of the school system at the time to expel girls who had been pregnant," she says. 'That policy disproportionately affected the black girls.

It wasn't race-based – it was just that it was common for the white girls who got pregnant to go off, secretly have the baby and come back and pretend nothing happened. But it was more common for black girls to keep their babies. So for those who kept their babies, there was proof that we had fallen from grace," Ross says with a wry smile. 'And so we were pushed out of school."

A bright student with an interest in science, Ross fought hard for her right to return to school. She successfully sued the school authorities and was allowed to return. Upon graduation, she was granted a full scholarship for Howard's University in Washington DC.

Although she didn't know it at the time, this fight against the system would be the first of many which would forge a dynamic international career in women's rights.

As the coordinator of SisterSong, she oversees 76 separate organisations supporting 'women of colour'.

The term 'woman of colour', she says, is an important one. 'We were tired of being called 'minority women'.

When we were together, we weren't a minority at all," she says.

'It's not a biological designation, like being born Chinese or native American. You adopt the term for yourself when you choose to work in solidarity with other oppressed women."

At 16, Ross moved to Washington DC to attend college. It was here she faced what she describes as another human rights issue, when she was denied access to birth control.

'Back then, if you were under 18 you had to have parental consent to use birth control," she says. 'But my mother wouldn't sign a permission form for me. I got pregnant again, this time with my boyfriend.

I decided to have an abortion because Washington DC was one of the few US jurisdictions which legalised abortions before Roe v Wade."

In order to avoid another pregnancy, Ross was fitted with a contraceptive intrauterine device (IUD) called the Dalkon Shield, which has been on the market for ten years. However, the device was found to have been designed with a fault which had a sterilising effect in Ross and thousands of other users of the device worldwide.

'It was a piece of plastic with a string hanging down from it. The only purpose for that string was for the doctor to pull it out when they tried to remove it," Ross says.

'But the string acted like a bacterial wick, leeching all kinds of bad stuff up into the uterus."

Her doctor at the time refused to remove the IUD, instead treating her for repeated venereal diseases.

'He accused me of sleeping with soldiers coming from Vietnam – saying that I had some kind of Vietnam VD – it was unreal. I said 'I don't know anybody who's been to Vietnam.' I told him that my boyfriend who was in law school hadn't been to Vietnam."

She was rushed to hospital, only to be confronted with a new nightmare.

'When I woke up, the same doctor was standing over me at the hospital bed basically saying, 'Ooops' and 'I'm sorry, I had to perform a complete hysterectomy to save your life'. Then he said it shouldn't be a problem because I already had a kid." Ross was 23 years old.

Spurred by what she describes as unbelievable anger, she brought her medical records to a private physician.

'He took one look at them and said 'this doctor has mistreated you'. He told me that the doctor should have immediately removed the IUD when I was diagnosed with pelvic infection, but instead he left it in for another six months. He said he could have avoided the hysterectomy."

Once again, a massive hurdle in Ross's life became an impetus for change. She was one of the first women to win a suit against the company that marketed the IUD, along with a ruling of medical malpractice against the doctor who treated her.

'I settled at a little over $100,000, which sounded like a huge amount at the time," says Ross. 'But I later learned that because the company was trying to keep so many of their lawsuits hush-hush, several women [who had been sterilised by the Dalkon Shield] had each been paid several million dollars in compensatory and punitive damages.

I think that the advantage the other women had was that they were white, and several of them had not had children already."

So why does she believe that colour made a difference? 'There's a stereotype against young black mothers, in particular. We're accused of being sexually irresponsible, a burden on society, unwilling to take care of our children and unwilling to work.

'I, of course, tried my best to live down all those stereotypes, but that didn't seem to matter. The fact that I'd had a child as a teenager seemed to write a script for what I deserved."

In 1979, Ross began to turn her experiences into a positive force, when she began to volunteer at the Washington DC rape crisis centre.

In 1976, she became the centre's director and was the first African American woman to fulfil this role in the US.

For the next decade she worked steadily for women's rights, all the while resisting the tag of 'feminism'.

'I even used to drag my boyfriend along to meetings with me to prove that I was heterosexual. And I couldn't burn my bra. My breasts would have flopped too much," she says smiling.

Ross has spent the past 20 years travelling in pursuit of furthering human rights. 'I have known for years the restrictions that are placed on women in Ireland," she says. 'We[in SisterSong] pay particular attention to any country that is dominated by the Catholic Church because the women in these countries live under a special degree of oppression that isn't necessarily experienced in more liberal countries."

The problems she sees in Ireland include abortion being against the law, that there is often a shame attached to sex and sexuality, and that 'there is a gender-based prohibition in society because boys are expected to be boys and girls are expected to be saints."

Having spoken with many Irish women's rights activists, Ross says she 'often hears about the fact that they can't even get a conversation in Ireland about the human right to accurate sex education and information.

'They cannot put the toothpaste back in the tube. The information is there and wherever women have sex, they should be allowed to control their own fertility."

Loretta Ross was the key note speaker at a conference on Reproductive Justice in Dublin in October 2009 organised by the IFPA and UCD Women's Studies Centre.